I found myself planing a last minute trip to Dallas for a belated birthday celebration.  One thing about me is that I’m a planner.  I like to have an idea of what I will be doing when I’m traveling somewhere.  While I’ve been to Dallas many times, I usually don’t spend a lot of time out exploring the area….usually I’m just there to see someone or do something (like the SGK 3 Day walk).  This particular weekend was chilly in Dallas, which I was definitely not expecting!  There are many things to do and see in Dallas but most involve being outdoors.  So we found ourselves looking for something to do on a windy and dreary Saturday.  I saw in my search of ideas that Dallas has quite a large art scene.  So we opted to check out the Dallas Museum of Art (DMA for short).  The DMA is one of the largest art museums in North America.  And to our surprise, it also boasts free admission so nothing to lose other than time to go and check it out!  While I will admit I’m no art buff, I thoroughly enjoyed myself at the museum.  There are 9 unique collections and the building itself is large and airy so you don’t feel overwhelmed even with all of the other visitors.  If you ever find yourself in Dallas on a bad weather day (or you just want to expand your culture), I definitely recommend the DMA!  It’s a gem!

Have I mentioned that I love to travel?  Because I really do.  And while I have been to Texas many times, my trips were mostly limited to the Dallas metro area.  So when one of my dear friends, Nicole, asked me if I wanted to join her in Austin for a weekend, I obviously jumped at the opportunity!

I had heard many stories about Austin being a cool place to visit but I went into the trip not having any agenda or any specific “must do” items.  This trip was just to catch up with Nicole and another one of our friends, Angela, who would be driving nearly 10 hours for the trip.  Nicole and Angela met up early Friday afternoon and did a little exploring while I was stuck at the office.

With an impending hurricane and so many people from Florida being in the metro Atlanta area, I opted to head to the airport early.

Having a cocktail while I wait for my flight

I didn’t get to the hotel in Austin until late on Friday so we just grabbed a quick bite at the hotel’s restaurant and called it a night.

Saturday morning, we woke up early and headed down to the South Congress neighborhood of Austin.  It’s a truly unique area of original restaurants and trendy boutiques. 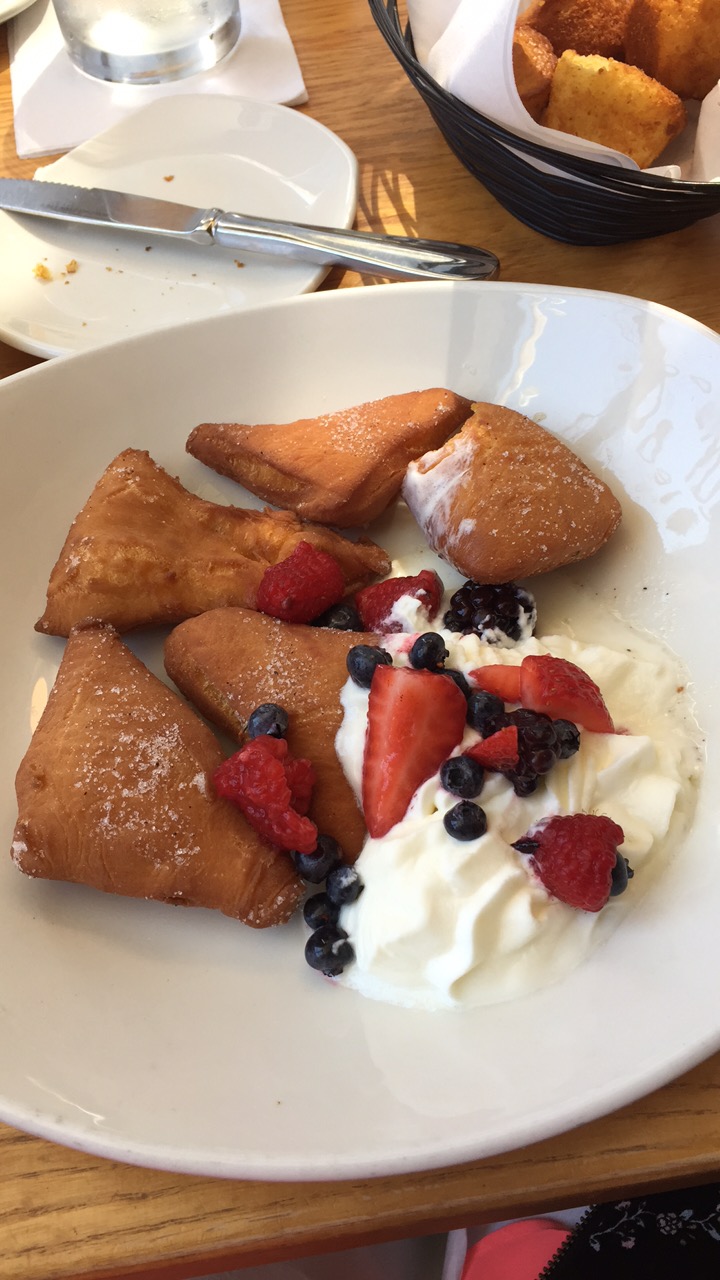 Local Musician – he was a great singer!

This guy was dancing with this prop – was super cool! 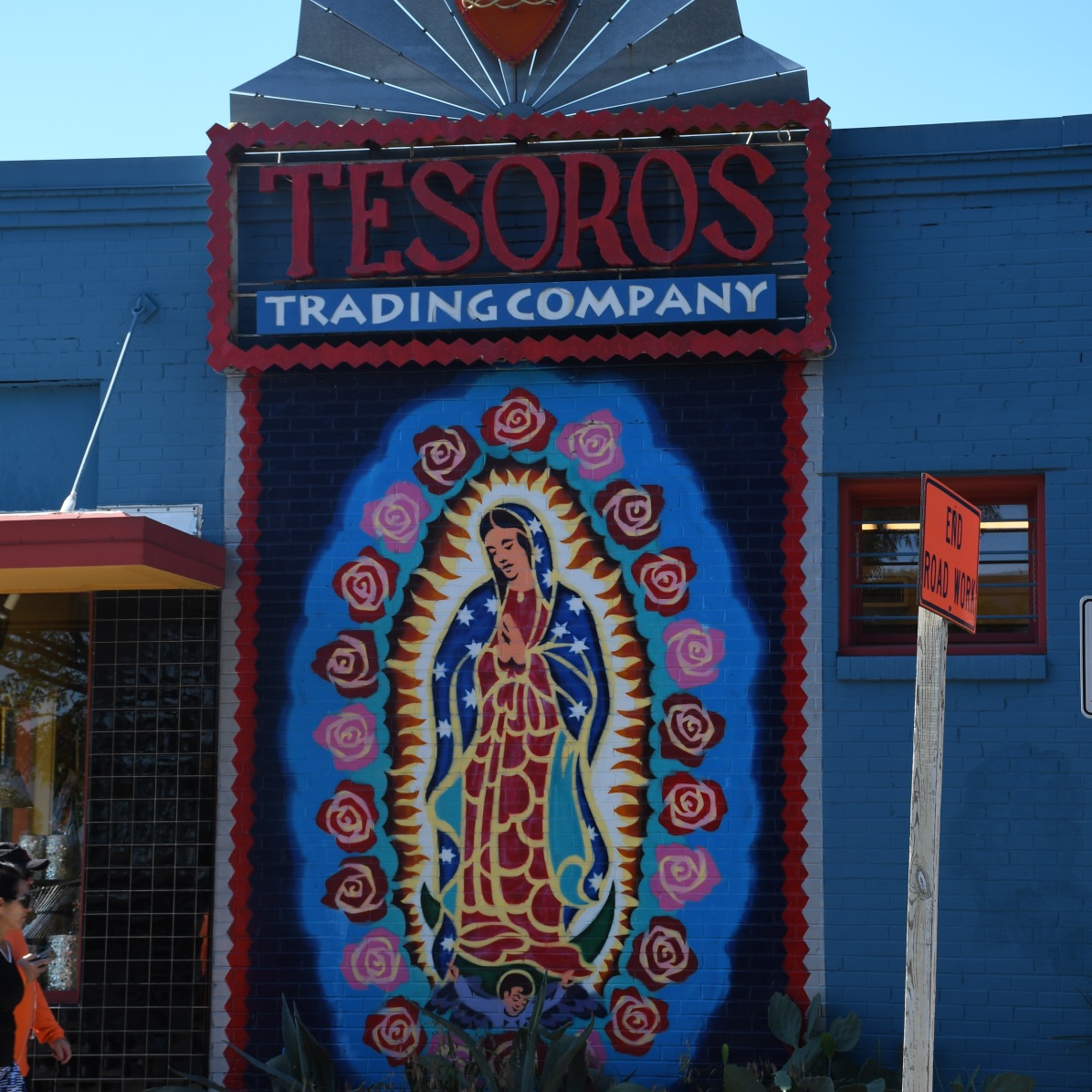 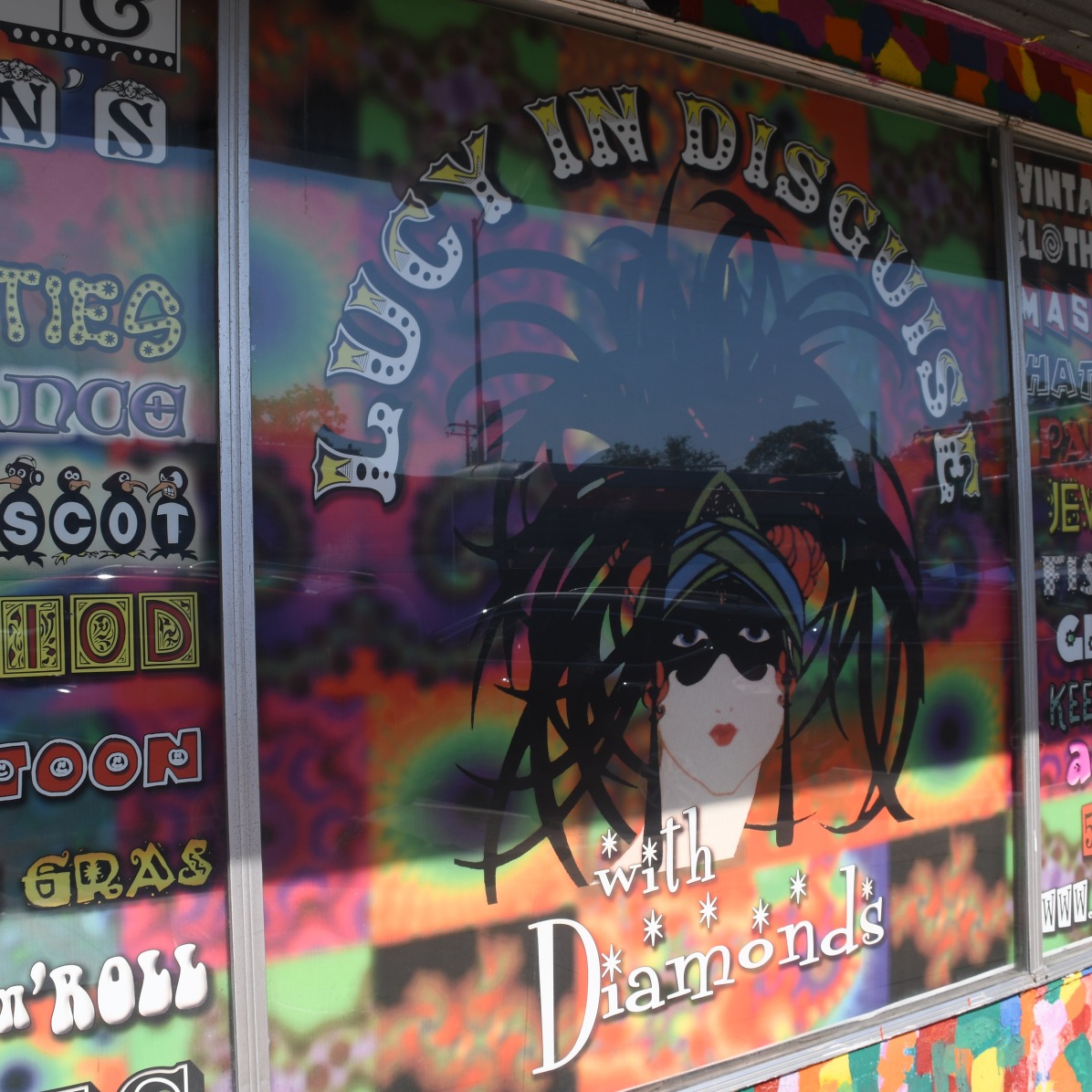 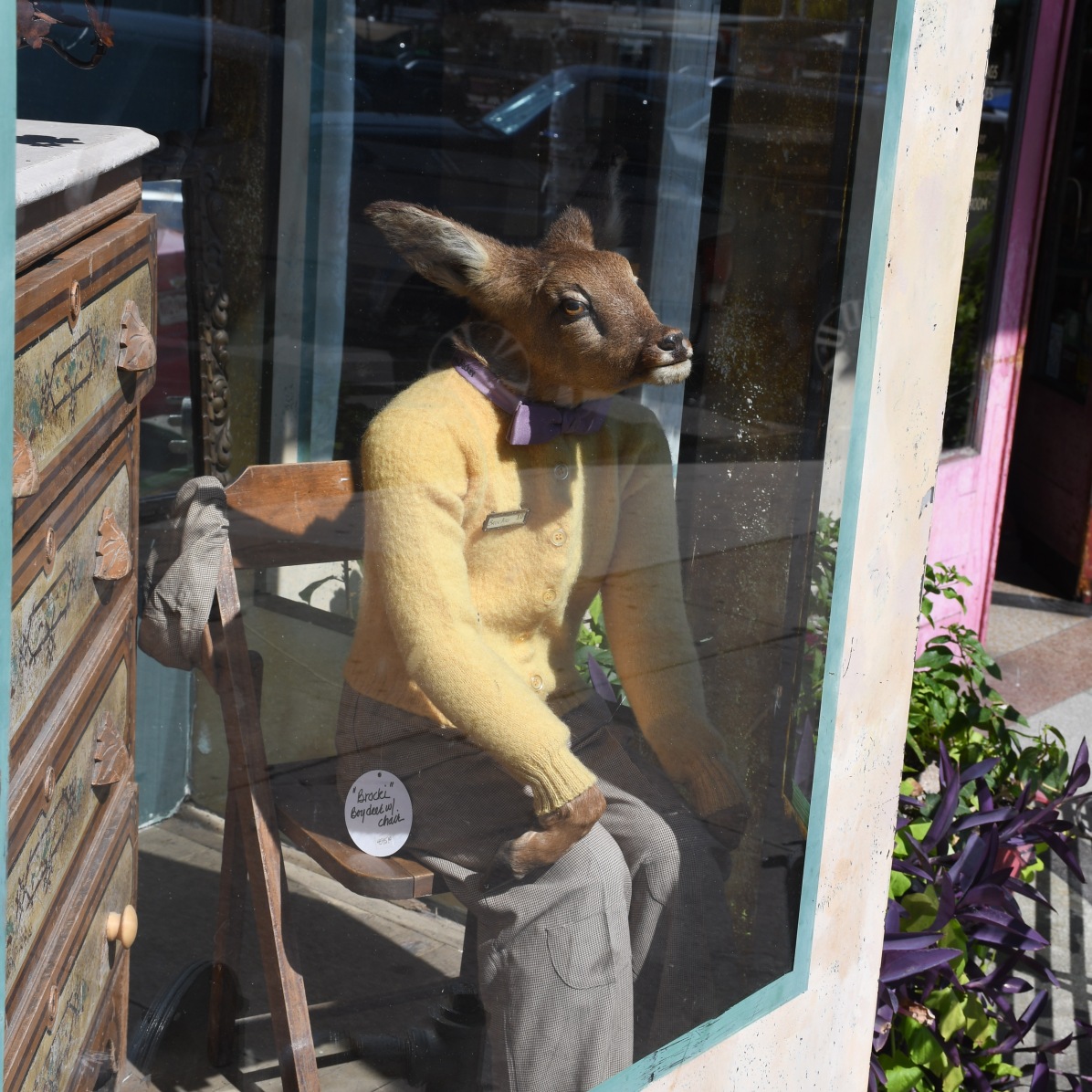 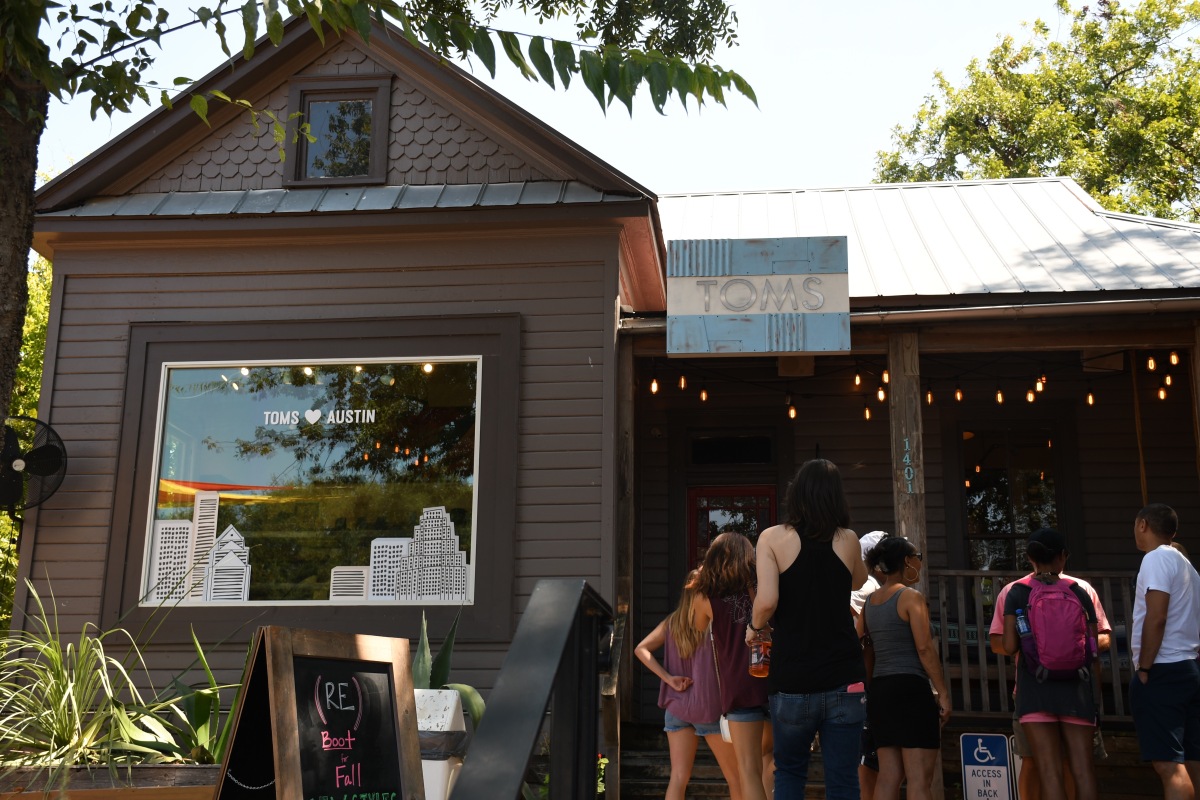 Freestanding Tom’s store – they had coffee, bags, sunglasses and shoes (obviously I bought my sweet granddaughter a pair while I was there!)

Looking toward downtown from the South Congress area

Later that day, we met up with another 3-day walk alumni, Treasure, and grabbed some southern food at Threadgill’s.  For those who don’t know, Threadgill’s is an Austin institution.   Janis Joplin honed her craft at Threadgill’s before becoming a legend.  So amazing to be somewhere that helped create the uniqueness of Austin (and it didn’t hurt that the food was really tasty!). 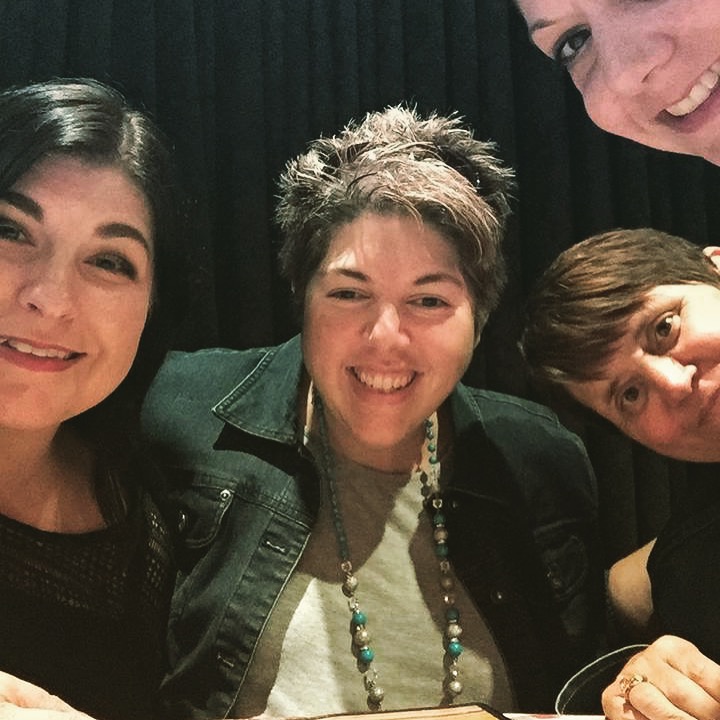 Sunday, I had a shortened day because of my flight but we were fortunate enough to make it to the Graffiti Park (at Castle Hill).  This park is the educational brainchild of the non-profit HOPE events and contemporary artist Shepard Fairey which launched in 2011.   It has become an inspirational outlet and creative destination for people that come to visit and is recognized as one of the Top 10 Artistic destinations in Texas.  I absolutely loved the experience!  They allow you to participate and spray paint with signup.  I am not artistically inclined, so I opted to just take it all in with my camera.  You can even climb up to the upper levels, and for that effort you are rewarded with a spectacular view of the city.

Angela – keeping an eye on things 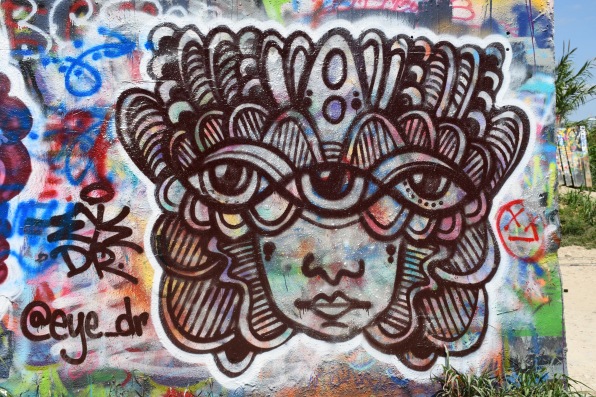 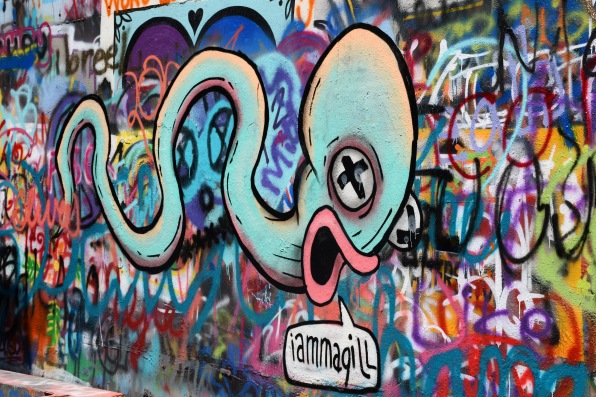 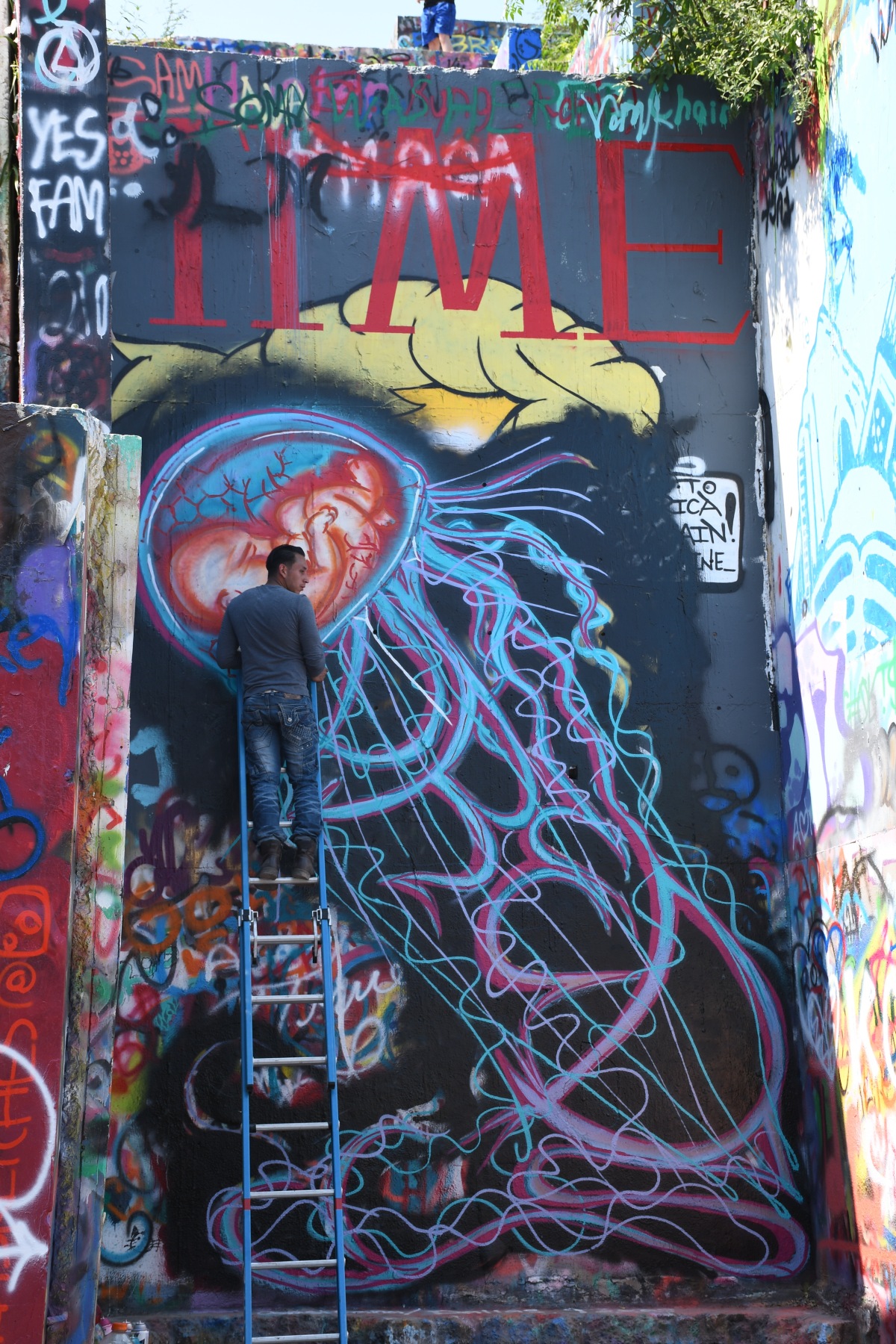 Artist working on this piece

Really liked this one.

I love the graffiti in the forefront of this beautiful building. 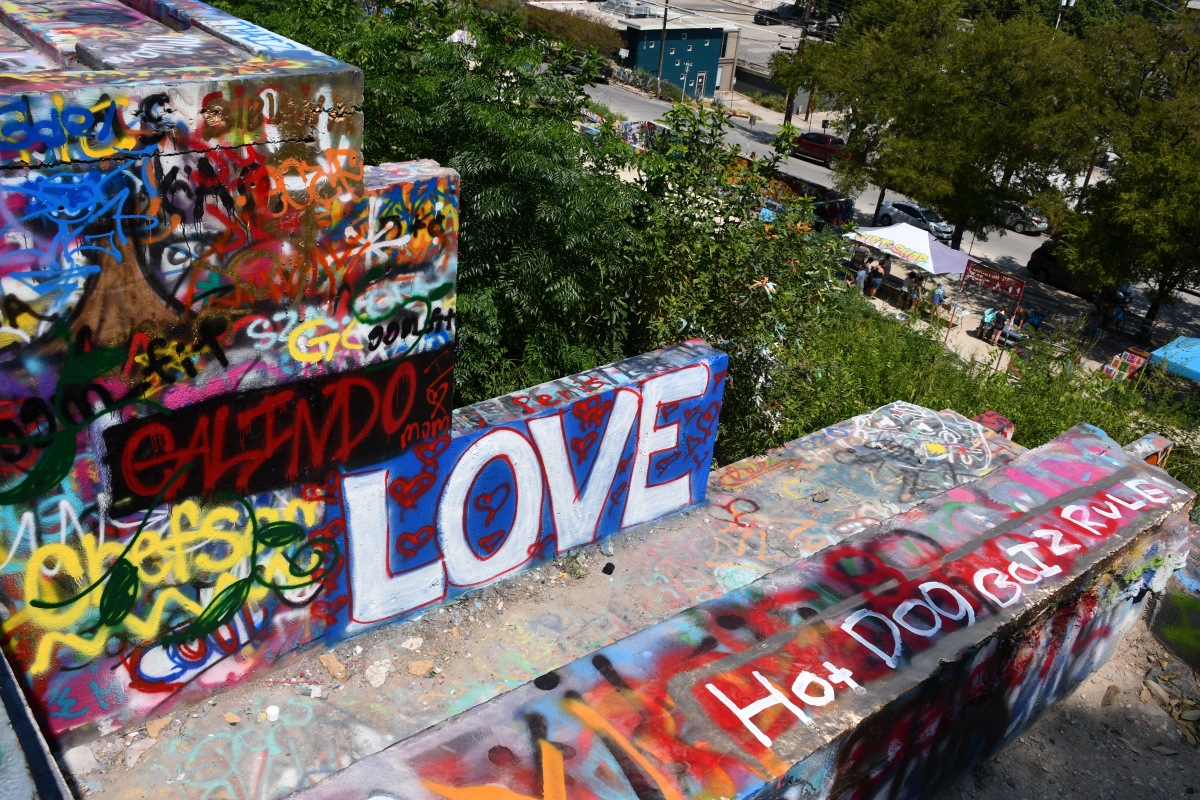 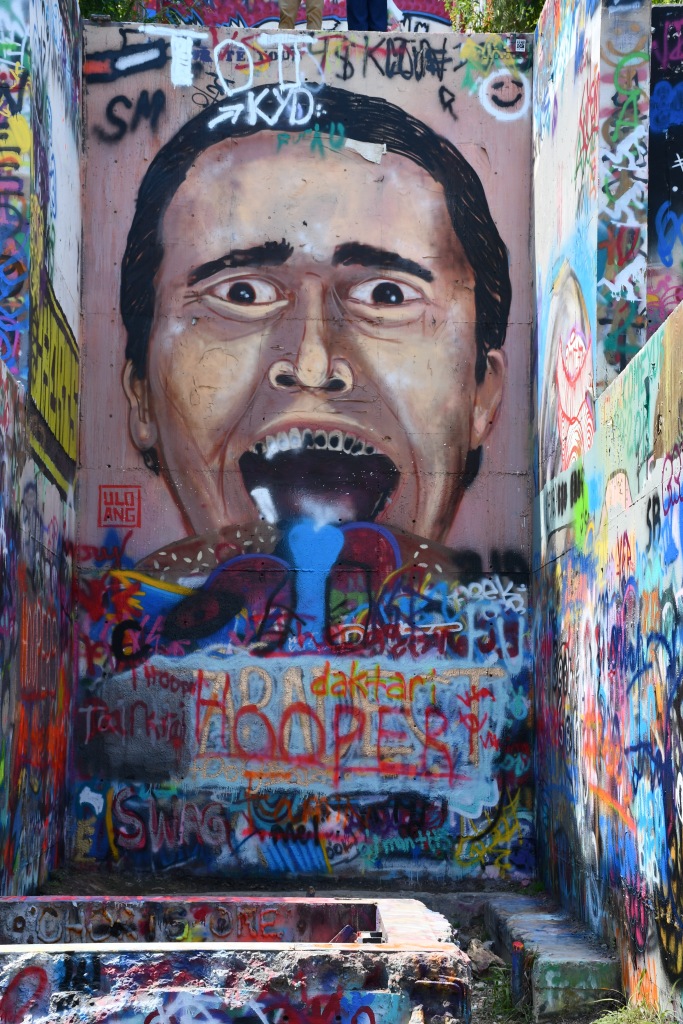 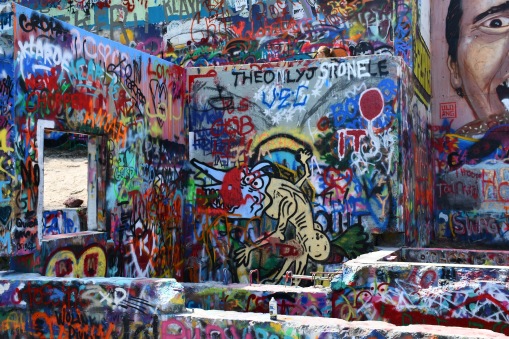 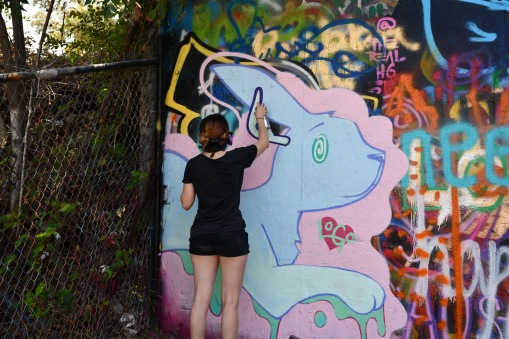 Even the abandoned sofa has been turned into art 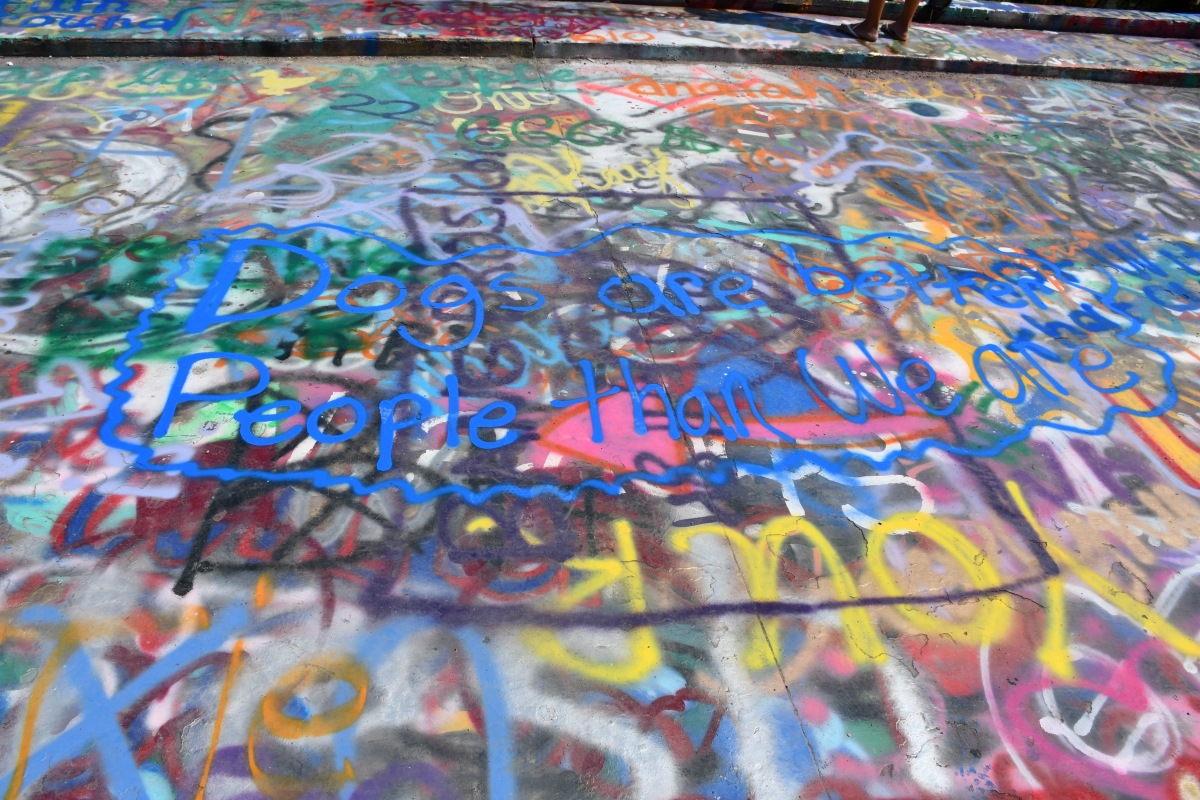 Dogs are better people than we are

View from the top 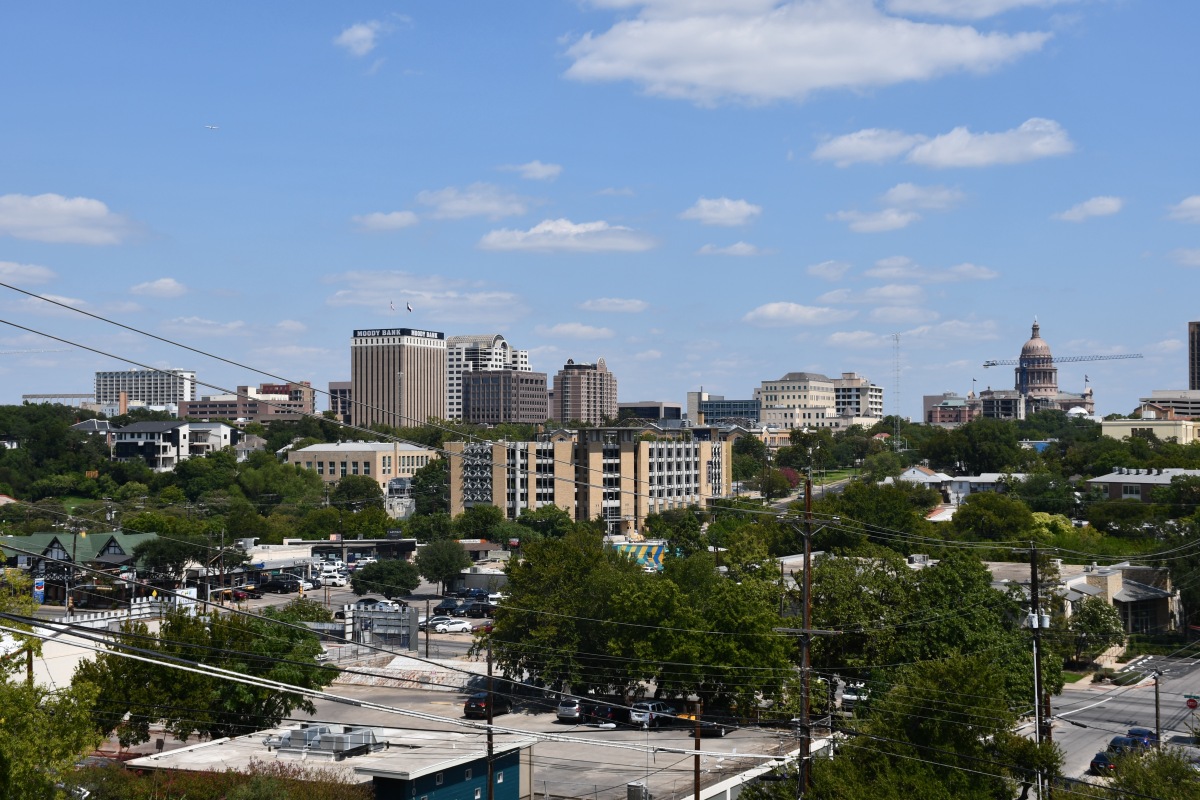 I’m the queen of the world!

I definitely would plan another trip to Austin.  The entire city just has a super chill vibe to it.  As their saying goes “Keep Austin Weird”.