Anyone who knows me knows I’ve always wanted to go to Thailand.  It’s just one of those places that has always appealed to me – a land with lush green beauty in the outlying areas, the intricate temples and, of course, the buzzing metropolis of Bangkok.  So I naturally jumped at the chance to join my best friend Laura on a work trip to Thailand!

Normally I plan my trips way in advance but since this was a tagalong to a work trip, I had less than 2 months to research and decide on what I wanted to add to my “to do” list.  With Laura having to work, I knew I would have to find things to entertain myself during the day.

Laura flew into Atlanta and then from there we flew about 14 hours to Incheon International Airport in Seoul, South Korea.  We arrived at 4am and had a 5 hour layover so we had to entertain ourselves until some of the shops opened up.

After having a proper Asian breakfast, we finally boarded our plane for the 6 hour flight to Bangkok, Thailand.  We arrived just after lunchtime to an overcast sky.  We grabbed a taxi and headed to our hotel in the heart of Sukhumvit, Bangkok’s shopping and restaurant district.  We dropped our bags and ventured out for a stroll around the area and had our first authentic Thai meal.

With the jet lag starting to set in, we opted to call it an early night.  The next morning, Laura headed to work and I decided to venture out on my own.

I secured my BTS (overhead rail system in Bangkok) card and off I went!  I ventured to one of the many (and I do mean MANY!) malls in Bangkok.  I opted to check out Platinum Fashion Mall in Pratunam.  The best way to describe this mall is a flea market moved indoors with air conditioning.  There are multiple floors of wholesale vendors all packed into small stalls peddling their items.  While most of the vendors sell clothing, I did manage to pick up a few souvenirs.  I also saw a lovely little park, Benchasiri Park, along my walk to and from the BTS station. 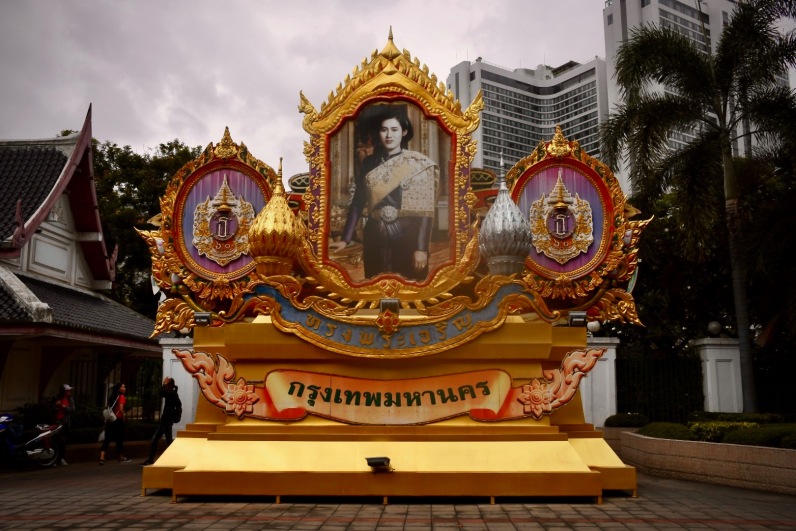 The next day I decided to go for culture so I hopped in a taxi.  I knew I wanted to see some of the temples that Bangkok is so well known for.  I asked my taxi driver to take me to Wat Arun (also called the Temple of Dawn).  The temple itself sits on the west bank of the Chao Phraya River.  The thing about most taxi drivers in Bangkok is that they are always trying to hustle you.  My driver wanted to turn off the meter and offer me a “deal” if I agreed to stop by a shop along the way.  Having been forewarned about this practice, I declined and he was not very happy with me.  So he dropped me off at a pier on the east side much further down than he should have and I ended up having to pay 1,500 BAHT for a roundtrip long tail boat ride to the temple’s pier.  Knowing I was paying way more than I should have but really having no other option since my taxi driver quickly disappeared, I opted to take the optimistic view that I had a long tail boat all to myself.  With the skies looking quite ominous, I made sure my life jacket was secured as the narrow but colorful boat made its way along the choppy river waters. 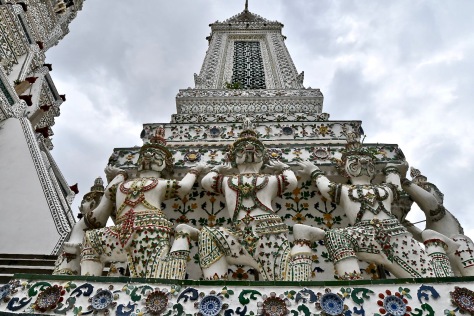 Up close detail – so pretty!

After getting back to the pier, I had an enjoyable lunch at the little restaurant on the pier.  The view was nice and this was probably the tastiest meal I had the entire time.

That evening, I joined Laura’s work group for a meal at a very unique restaurant called Cabbages and Condoms on Sukhumvit 12.  This restaurant was started as a way to help
support outreach efforts by Population and Community Development Association (PDA).  PDA focuses their efforts on health, education, HIV/AIDS, rural development, environment and water, all while using a very clever concept to generate interest and business.  The food was delicious and I gladly purchased some of the themed items from their gift shop when we were done.  Definitely a memorable spot!

Even the lamps are themed 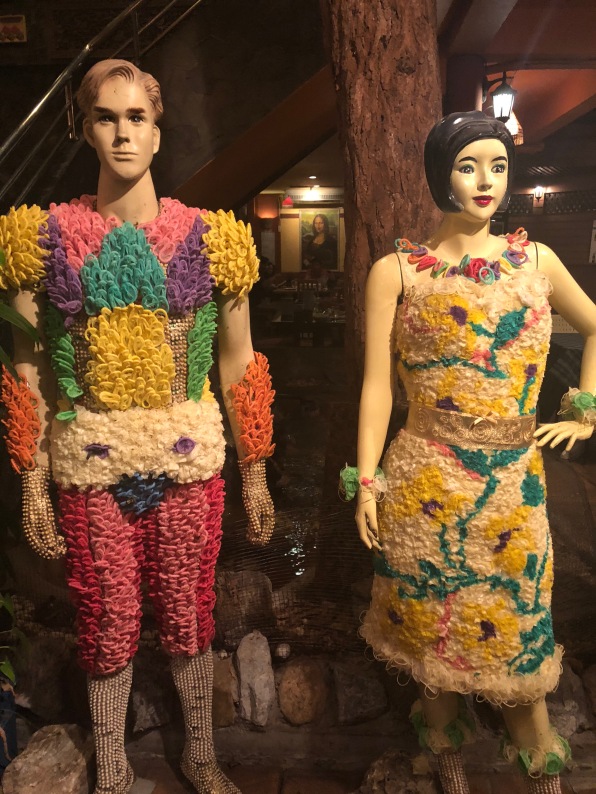 At dinner, I was introduced to a couple of ladies, Carol and Meena, who were just lovely and agreed to check out some places with me the next day or two.  We met up early the next morning and grabbed a taxi to The Grand Palace.  This complex has been the official residence of the Kings of Siam since 1782 and is the most visited tourist site in Bangkok.

Dress code is strictly enforced at the Grand Palace.  Meena had to purchase a t-shirt to cover her shoulders and although my capri pants were below the knee (which was okay per my research), the attendant as we entered advised I would have to purchase a wrap or pants to cover up more.  The Grand Palace is truly breathtaking, but with the crowds and heat, it can feel overwhelming at times. 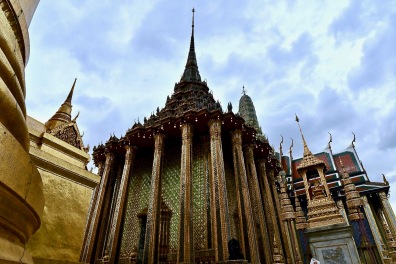 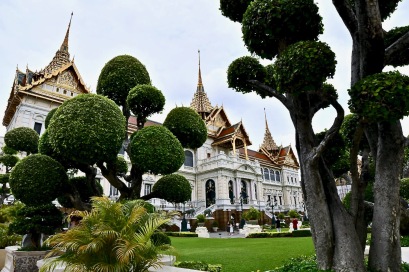 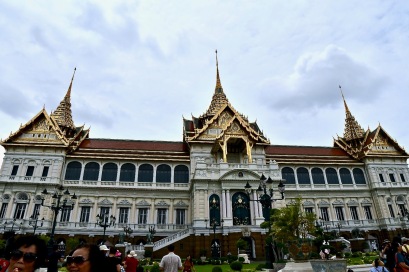 Adjacent to the palace is Wat Pho, a Buddhist temple which holds a 46 meter long reclining buddha covered in gold leaf.  The photos really don’t do it justice – it’s MASSIVE!  I especially love how detailed the bottom of the feet are – they are covered in laksana (Buddhist Sanskrit symbols & characters). 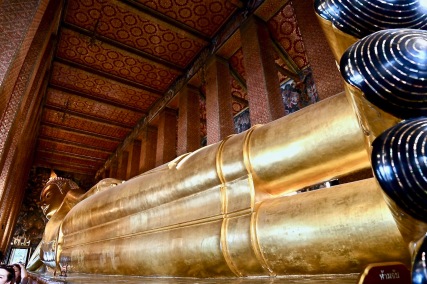 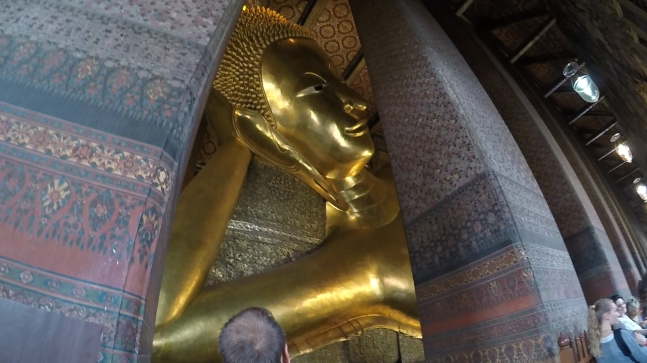 Thursday I spent the day with Carol shopping at another mega mall, this time MBK Center.  I may have gotten so many deals, that I actually purchased another suitcase.  What can I say – I’m a shopper!  That evening, a small group of us decided to venture over to the Chana Songkhram section of Bangkok.  After enduring the incredibly packed BTS trains, we made it to the dock and got on the river boat.  As we moved along the Chao Phraya river, the skies opened up and we were drenched.  Thankfully, the downpour didn’t last long and we had a tasty meal at a little place overlooking the river. I even got to see Wat Arun again, this time all lit up at night.

Saturday, we hopped on a short flight to Phuket.  We flew with Bangkok Airways and they were really great.  I’d definitely use them again when I’m in Thailand.  Once we arrived in Phuket, we had a shuttle to the pier and then a 20 minute speedboat ride to our resort on Koh Yao Yai.  This place was AMAZING!  I would definitely recommend this spot for anyone who wants to just relax and enjoy some beautiful surroundings.  Way less commercialized than Phuket. 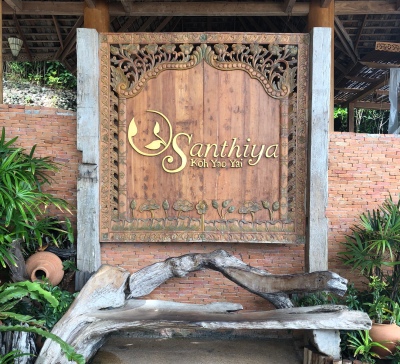 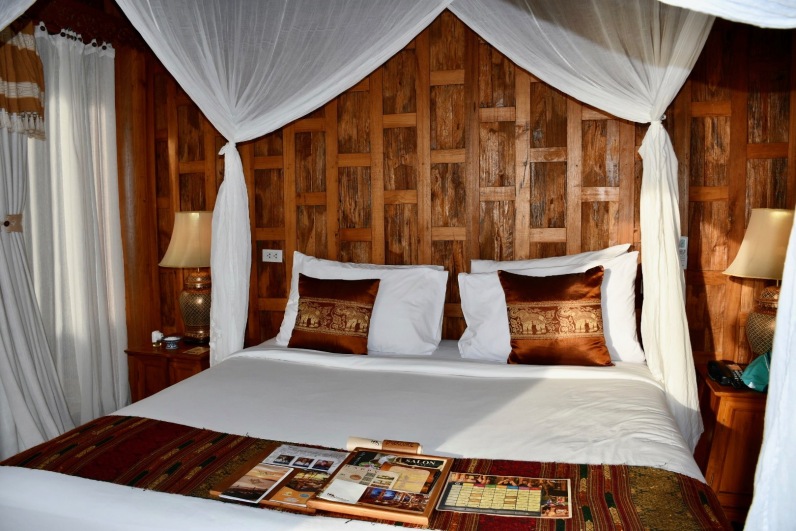 Really could get used to this view! 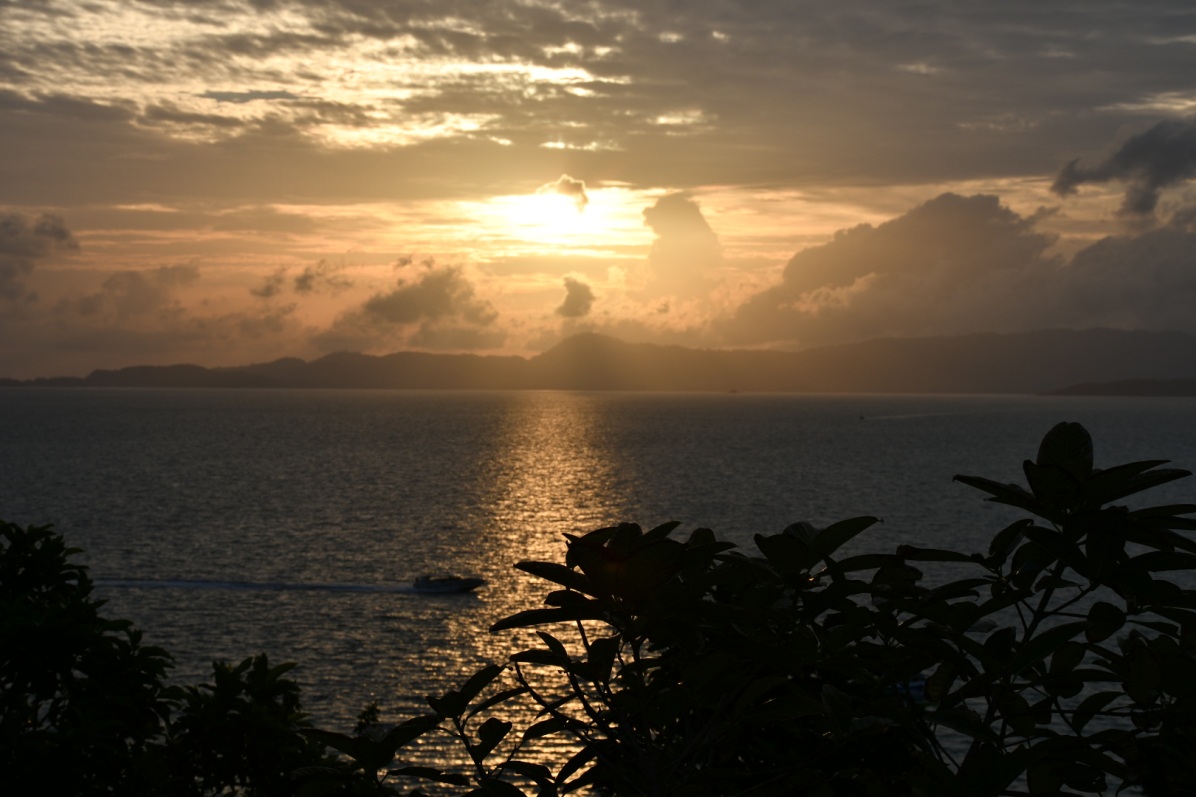 While this place was beautiful and relaxing, it was not without a little excitement.  Before we read through the details in the villa, we ordered some room service and dined outside before getting into the pool.  While in the pool, we noticed a little friend had wandered onto our deck.  He tried our empty cans of soda and threw a plate on the deck before eating some ketchup with his hands and wandering over to pick up my cell phone.  When that happened, I tried to scare him by splashing in the pool which only caused him to come over and look at me as if I was the strangest thing he had ever seen.  After realizing I was not trying to have a standoff with him, he wandered along the edge of the pool and disappeared in the trees.  In the excitement, Laura thought she had recorded the incident but did not actually hit the record button.  Was definitely a first!

Not the actual monkey we saw….although it could be!

The dinner that night was delish and they had fire dancers on the beach.  Such a cool experience.  Sadly, we only had one night in Koh Yao Yai so we had to leave.  I definitely want to return again one day.

Wish we had more time!

Monday morning we boarded our flight back to the USA, stopping first again in Seoul.  We had a short layover but made it in time.  Only to end up sitting on the plane for 3 hours due to a lighting issue.  Eventually, Delta had everyone get off the plane and after more delays, opted to cancel the flight.  They put us up in a Hilton near the airport and we finally got to fly out the next day.  Never a dull moment!

Now that I’ve finally gotten to spend some time in Asia, I definitely need to start looking at more places there to visit.  They call Thailand the Land of Smiles and I must say the majority of the people I encountered were very friendly and welcoming.

Until next time Bangkok!